The Two Bearded Ladies attempt to update you on the Stars playing in Worlds, cast aspersions on Jimmy Veseys moral character, Carolyn goes on a rant about East Coast Bias, and Merrin tries to make #duhviously happen. (It’s never going to happen).

END_OF_DOCUMENT_TOKEN_TO_BE_REPLACED

In the latest episode of the podcast, we talk women’s hockey, Merrin makes her HockeyFightsDV pledge, Carolyn is again reminded of how much the Stars hate fancy stats, and no one wants to go up against the Swedes in a dystopian America.

We are on iTunes, so you can listen to us that way by clicking here and subscribing. Please rate & review if you have a second! END_OF_DOCUMENT_TOKEN_TO_BE_REPLACED

Well friends, wasn’t that All Star break fun? I also took a few days off to remind my friends and family that I exist, but it’s time to come back to reality and camp out in front of the TV again – real hockey’s back.

We’ve heard a lot from the players (and coaches, and media) about how seriously the Stars are committed to making the playoffs, but unfortunately, it just doesn’t look like it’s going to happen.

Here’s a revamped version of my playoff chart. I’ve added in the Blackhawks because they’ve recently lost some positioning.

The Stars Win % has dropped significantly since I started tracking the 14 day trend, and honestly, the two “hot goaltending” losses we’ve had recently (WPG and BOS) would get us closer to a spot, but would still put us one point out of the money. We’re on pace right now for 87 points and that looks about right.

Again, I’m a huge believer in trends and momentum – St. Louis had a great run that’s pushed them over Chicago in the standings, but their overall number is only 57% wins, which is probably not enough for them to stay at number two. On the other hand, the Blackhawks have been failing to convert any of their recent losses into extra points which is why you’ve seen them slip.

The Kings are doing their usual “sneak into the Playoffs” thing, but a 43% OT win percent is unsustainable. Either they’re going to turn it into Wins (like Winnepeg has done) or losses (like Minnesota), and it’s going to be the Kings’ early points (and San Jose’s collapse) that get them into a safe spot.

Are the Flames for real? I can’t tell. They’re just as streaky as the Stars are this year, with similar goaltending issues. They have less recent experience in making this playoff run, so I’d place my money on the Stars over the Flames for that last wildcard spot, though if you put any weight in trending, neither will make it.

But for the Stars, Merrin probably put it best: We need a hero.

For those who care:

Why not use “current pace” instead of 1/3 pace? Because it would double count the last 14 games (which already do stretch into December for most teams). The math will obviously change the closer we get to the end of the season, and we have more of it set in stone. Currently, teams have only played an average 56% of the season, so there’s a lot of speculation that can be done.

(Side Note: Like most of this blog, our podcast does use a few naughty words, but in general is safe work.)

(Side Note 2: I am working on trying to get the Podcast up on iTunes for everyone, but am kind of bungling my way through it for now. Thank you for your patience!)

And finally, your game chart from last night (numbers 5v5, from war-on-ice, and D pairings from 2nd period on)

Good morning everyone, it is officially COLD in Texas. Thankfully, I work from home, so ha! Suck it, mother nature!

Anyway, there was a game last night and while the Stars commentary team called it a “disappointing loss” most of the fans I know were just happy to pick up the point.

All numbers courtesy of war-on-ice.com, 5v5, all score situations, unless otherwise noted. 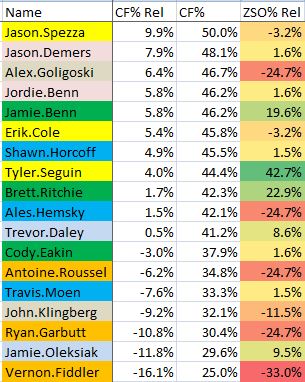 Playoff Race Update: Things actually look pretty good. As long as we keep picking up points in most of our games, ideally wins, but better OT than losses, we have a good shot at making the playoffs. The issue is that if we get that 8th seed (and that’s probably what it would be) we’ll be playing either the Preds or the Blackhawks – and we can’t play like we did tonight and make it to the second round.

To summarize my feelings on this game, I’m going to do a very vain thing and quote myself.

As usual, all numbers from war-on-ice.com, 5v5, all score situations, unless otherwise noted. 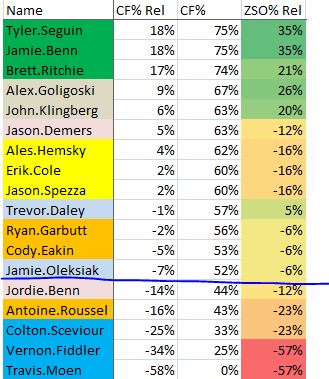 Listen, if we’re going to lose, at least we should lose to the East. Right after the Preds we play the Avs, which is another team trying to claw their way into the playoffs, and two games after that, we play the Jets, one of the teams currently in a wildcard spot. We’re still in this, but we’ve got to come out hot every night.

Going into this season, everyone knew the Central Division was the one to beat. Stacked with the Blackhawks, the Blues, the Avs and their Vezina nominated goalie, and an offseason strengthened Stars team, the playoff race was bound to be an interesting one. And it has – the Preds finally have a healthy Rinne and offensive weapons they haven’t before, the Avalanche have regressed to where statisticians expected them to be, and Winnepeg is refusing to go down without a fight.

And, well, the Stars are on the outside looking in.

All the Dallas fans know exactly how we got here, that horse is dead, and no one needs to beat it. The good news is that the Stars are on an upswing, one that’s unmatched in their division. The question really becomes – is it too little, too late?

Unfortunately, the answer is maybe.

If everyone on the bubble (St. Louis, Vancouver, San Jose, Winnepeg, Calgary, Minnesota, Dallas, and Colorado) keeps playing at the pace of the season thus far, we’re out by a long shot.  But that’s unlikely.

If everyone keeps playing at the pace set by the last 14 games, we’d end up 7th in the West, and as one of the two wildcard spots. But with 39% of our remaining games being played against the Central Division, where the Stars just earned their first win on December 27th, that pace is going to be put to the test. This scenario is also unlikely.

We’ll probably end up somewhere in the middle of the two, which puts us frustratingly close to a playoff spot (9th in the West).

But hope isn’t lost. Momentum is on our side, and there are a lot of points on the table in January and February specifically. We play the Jets and the Avs three times each in those two months, and the Wild twice. Because these are all “bubble” teams, those are basically “4 point games”, and will allow us to close the gap even faster. We also play the Blues 3 times this year, twice at home, and given how they have backslid over the last month, those might be the most important games we play all year.

It’s going to take that special combination of hard work and luck for us to make the playoffs this year, but I still believe we will.

After all, the Stars have always liked playing from behind.